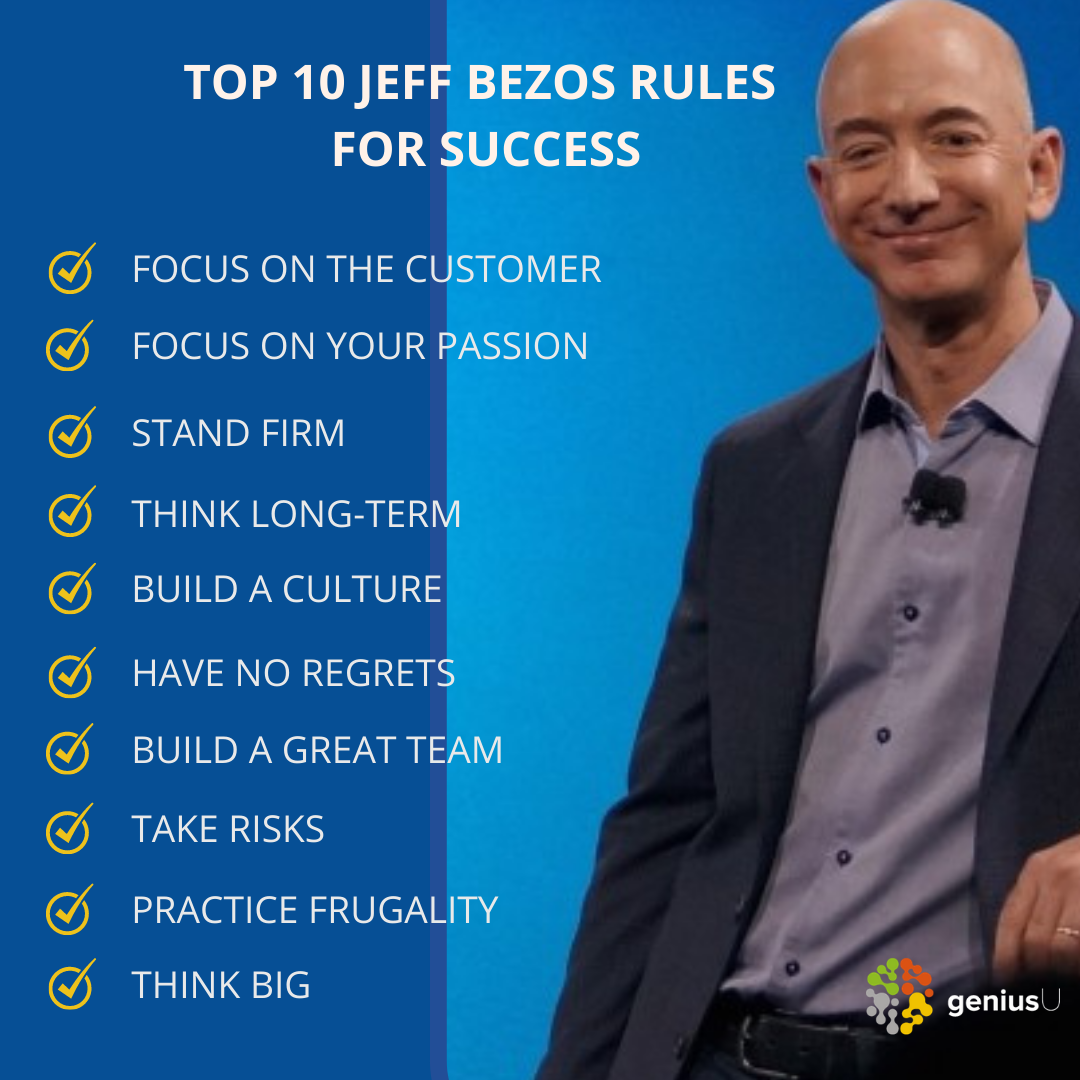 Jeff Bezos is perhaps one of the richest people in the world today all because he took an idea that he drew up during a cross-country trip from New York to Seattle. He started his fledgling business in his garage once he settled in Seattle and not too long after launched what is now the most successful online shopping network in the world, Amazon.

At one point and time, the internet was still a thing that received little use and was thought to be only useful for school and other various endeavors. Bezos however took note of its continuing rise and took advantage of its popularity by offering people items for sale that would often go for much less than they could find them in the stores. In short, he took an idea that was worth little if anything and made it into a multi-billion dollar industry. Not bad for a business plan drawn out during a road trip.

What grew an idea planted in a Bellevue garage into one of today’s most successful businesses? Below are a few of the many learnings and strategies that you can use to nurture the success of your own enterprise.

1. Focus on the customer
Serving the customer in the best possible way. Jeff Bezos is doing a similar thing right from the start. Instead of saying he wants to beat book stores with an online sales channel, he went for making the world’s book in print accessible to customers at all times. Jeff Bezos understood early on that the advantage of an online business was in measuring customer behavior. Over the years, Amazon has constantly been adding new features to keep their customers happy which, in turn, bolsters the company’s sales.

Yes, the initial product or service might not be the best solution in favor of the customer. Still, the entrepreneur keeps pushing, talking to customers, finding the flaws, improving them, going from Version 1 to Version X with ease. Hunt relentlessly for what makes your customers smile, and innovate based on their needs.

2. Focus on your passion
The real magic happens when people follow their inner calling. People with a strong calling build the world’s most powerful companies. So always have some sense of passion for what you do. Without passion, business becomes rote and mechanical, a process that holds little joy other than the money. In other words, it becomes a pointless race to whatever end awaits, a meaningless existence that begins with the sunrise and ends with the sunset each passing day.

The journey to success is not the smoothest, it would be rough and sometimes frustrating but the moment you align with your passion, it will be easier.

3. Stand firm
Bezos understands that to stay relevant and growing, you must be willing to adapt. But you must also know when to draw the line. For him, that means sticking to the big vision while allowing the smaller moving parts to fluctuate. For Bezos, compromising on customer experience was never an option. Once, he almost shut down an entire email marketing division after an embarrassing customer email was forwarded directly to him. That one email sparked a marketing overhaul.

Your word means a lot when you conduct your own business, and should you be able to stand firm on that and see how your customers will rally to give you their business. A business that can’t or won’t stand behind its own guarantees is destined for obscurity.

Find your passion — be customer-centric and know what you stand for—sound advice.

4. Think long-term
Bezos started Amazon with the long game in mind–a play that meant accepting short-term losses that not everyone understood. Consider the e-book. When e-books first entered the market, most publishers sold them at prices commensurate to their print editions. Bezos, however, projected that their long-term price would be around 10 dollars and started selling them for 9.99. At first, this decision generated losses of about 5 dollars per e-book, but when the price eventually dropped, Amazon had already become the go-to for e-books. With this surprising strategy, he’d also laid the foundation for one of the company’s greatest successes, the Kindle.

Focusing on the long term has always been at the cornerstone of Bezos’ empire state of mind. Don’t be afraid to make decisions that might be unpopular in the moment but will reap future rewards.

5. Build a culture
Culture is the cornerstone of the company and the development of employees. To create the kind of culture that innovates and grows with intention, you must understand the new era of leadership as Bezos has.

6. Have no regrets
Jeff Bezos has put it in his own way when he makes decisions. His method is flash forwarding to the age of 80. In one of his speeches, Jeff brings this example in connection with his decision to found Amazon.

"I knew that when I’m 80, I would never regret trying this thing [quitting a good job to start Amazon] that I was super excited about and it failing…. If it failed, fine. I would be very proud of the fact when I’m 80 that I tried."
— Jeff Bezos

His approach is to make decisions that minimize the regrets in his life, and this spirit when he decided to found Amazon. Lucky for us consumers, he did make this decision as otherwise, we believe the world would look differently today.

7. Surround yourself with the right people
If you’re going to accomplish great things, you need a team of great people who work just as hard as you do.

As years of research reveal, it’s not only about who is on the team, but how they work together. That’s why hiring is so important. You want people who know what they’re doing and have the necessary emotional intelligence to work well with others at the same time.

“Every time we hire someone, he or she should raise the bar for the next hire, so that the overall talent pool is always improving,” Bezos says.

8. Take risks
Before that big idea in the Bellevue garage took off, Jeff Bezos had a secure job at a hedge fund. Still, he quit it, set up in his parents’ garage, and poured his savings into making the Everything Store a reality. And it worked. Taking a risk isn’t about failing, but it is about living up to the ideals that business is built upon. The core message is that taking a risk is preferable to being too fearful to move.

Risks are worth taking. Half the time, you’ll fail, but when that initiative results in a win, it just might be big and bold.

9. Practice Frugality
Though not geographically far from the swank, luxuriously-stocked offices of Silicon Valley, Amazon got its start in a simple, functional space in Washington state and operated on a market with minimal margins. Frugality is in Amazon’s very DNA and seems to help the company focus on the most important things: its customers and continuous innovation. Bezos believes that frugality is a positive thing because it drives innovation.

What does frugality mean for Amazon? For starters, employees pay for their own parking tickets, snacks at the office aren’t free, and, when traveling, employees bunk in double rooms. In general, Amazon isn’t a place where staff spends relaxed days brainstorming over coffee. The norm is to work long, hard, and smart, with no compromises on any of the three.

10. Think big
Don’t be scared to dream, dream big, as big as the ocean. What sounds impossible today can be the future – as is seen in many gadgets and products we have seen. Take the Kindle, for example, Jeff Bezos wanted an e-book reader that could find, select, purchase and download any book from any location instantly! This seemed unfeasible to the designers then, but now Kindle is THE reader!

Amazon was never intended to just be an online bookstore or even just an online retailer. Books just happened to be the easiest entry into the marketplace at the time. And for Bezos, Amazon was just the beginning. In 2000, he secretly founded Blue Origin, a space exploration company, to fulfill his ultimate dreams of not only exploring deep space but eventually colonizing other planets as a backup option for Earth.

Think about your dreams versus the tools you’re using to get there. Don’t confuse the two, and don’t settle for the easier option.

“If you want to get to the truth about what makes us different, it’s this: We are genuinely customer-centric, we are genuinely long-term oriented, and we genuinely like to invent. Most companies are not those things. They are focused on the competitor, rather than the customer. They want to work on things that will pay dividends in two or three years, and if they don’t work in two or three years, they will move on to something else. And they prefer to be close followers rather than inventors because it’s safer. So if you want to capture the truth about Amazon, that is why we are different. Very few companies have all of those three elements.”
— Jeff Bezos

Brilliant Business strategies are no single formula for success, however, these tips are common to many successful entrepreneurs who have seen all the ups and downs and though they aren’t perfect human beings, sure know what they want in life and business!

What are your rules of success? And let us know what do you think, which one is the most important for being successful as an entrepreneur.