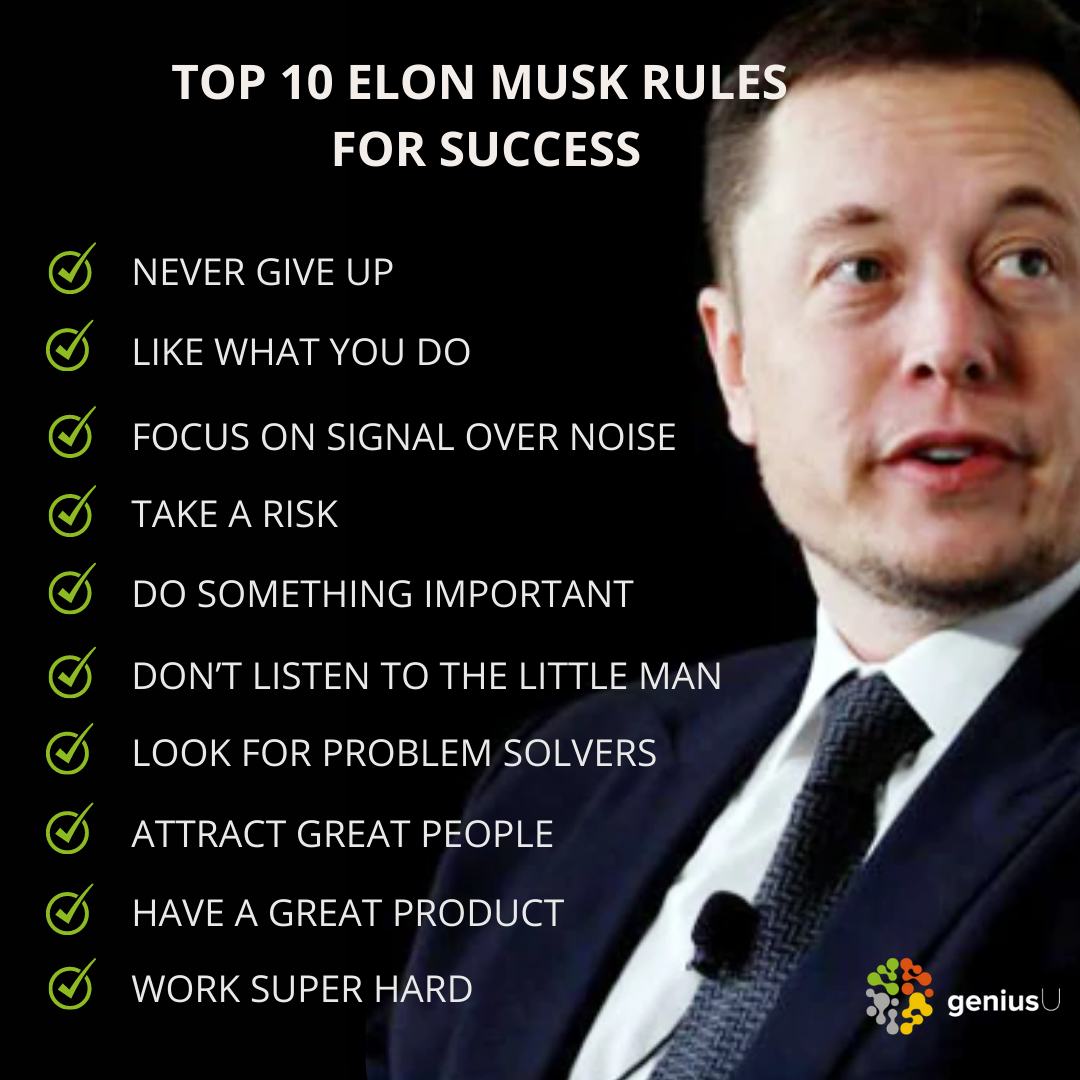 Elon Musk is a business magnate, industrial designer, and engineer. He is the founder, CEO, CTO, and chief designer of SpaceX; early-stage investor, CEO, and product architect of Tesla, Inc.; founder of The Boring Company; co-founder of Neuralink; and co-founder and initial co-chairman of OpenAI.

But, before being a billionaire, his only assets were his brain and a vision to change the world and humanity. Musk is known as a man with ‘unmovable principles and a never giving up attitude. Have a look at his 10 principles of success:

1. Never Give Up
Elon faced two continuous failures in an attempt to send rockets to space which were worth $90 million. Despite that, the man does not give up and continued with the third successful attempt. Today, his company is the largest private producer of rocket engines in the world.

"I don’t ever give up. I’d have to be dead or completely incapacitated.”

2. Like What You Do
He suggests going into a profession, career, business or undertaking that one naturally is attracted to. He believes that if a person likes what he is doing, even though he suffers failures and setbacks, he will not be easily discouraged. Also, a person who has a genuine interest in a project or field will naturally gravitate towards it and be more focused.

3. Don’t Listen To The Little Man
When people have set their minds into doing something great, they should avoid listening to those who will try to stop them. It is best to stay away from these negative influences that will try to hold people down or minimize their chances of doing great things.

4. Take a Risk
Elon believes that younger people are in the best situation to take bolder risks. Those who have just graduated from college or those who are just starting with their careers have the best opportunity, simply because they may only need to worry about themselves. As they grow older and have a family, they have to consider other people that may be affected by their decisions.

5. Do Something Important
How many successful private ventures you can recall in the space industry? It’s hard to recall any except SpaceX which has done a tremendous job. It is a complex field to bet upon. He did it despite all odds because he cared. He believes it is important to make human beings a multi-planetary species.

"If something’s important enough, you should try, even if the probable outcome is a failure.”

6. Focus on Signal over Noise
Elon believes that companies should be able to distinguish which efforts directly contribute to the betterment of a product, and which efforts do not. Once people have identified which ones are contributing to a better product, they should focus on that. Efforts that do not necessarily make a product better is considered noise and should be stopped.

7. Look for Problem Solvers
Elon advises on what to look for when hiring, and he recommends looking for problem solvers. To know who these people are, he asks questions about how they solved their particular problems several layers down. He believes that the people who are able to describe what happened up to the deepest level are the ones who were really involved in solving the problem. Otherwise, those who were not really involved would not be able to tell.

8. Attract Great People
A company is just a group of people, according to Elon Musk. And the most important thing in building or joining a company is to attract great people and to be with them. He believes that the success of a company is largely determined by how talented, hardworking, and how focused cohesively in a good direction, that will determine the success of the company. So do everything you can to gather great people if you’re creating a company.

9. Have a Great Product
Elon advises that in whatever people are doing, they should have a great product or service, with emphasis on great. In offering a product or service in a market where there are existing competitors, that product should be much, much better than the others. It cannot be just a little or slightly better. Otherwise, consumers will just prefer the trusted or familiar brand.

10. Work Super Hard
In starting a company, Elon warns that people should be ready to work ‘super hard’. From his own experience, he describes ‘super hard’ as working hard every waking hour, every day, seven days a week for a time, especially when he was starting. He made sacrifices against comfortable living to put resources in aid of his business goals. He believes that the person who worked doubly hard will, in the end, get twice the work done.

With a passionate and innovative billionaire like Musk, he has not just started these businesses, but revolutionised every industry he has touched: E-cash (PayPal), electric cars (Tesla), rocket technology (SpaceX), and energy services (SolarCity). But before the success, he learned how to fail successfully as well. Failure is probably the least of his worries, rather a necessity.

People who are successful today, such as Elon Musk, did not rise to the world spotlight because of uninterrupted triumphs, one after another. They all experienced setbacks, but they were resilient enough to get back up and try again. They tried many times, and in the process, they learned many things also. The extra effort you make today will have a big impact tomorrow. These ten rules are not the only rules for success, but we hope that learning ten more things will help get you on your way.

"Failure is an option here. If things are not failing, you are not innovating enough." — Elon Musk