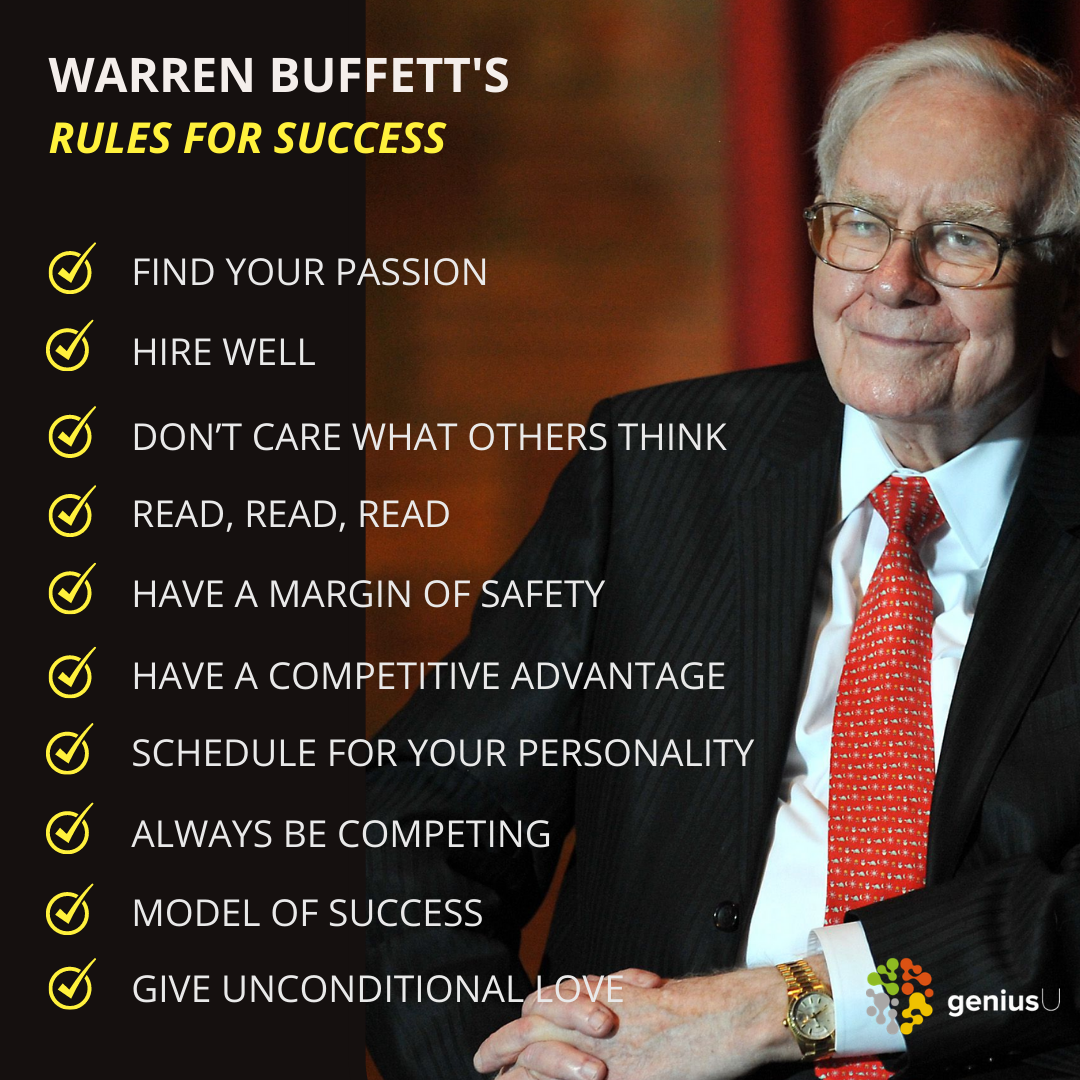 Warren Buffett is an expert investor and businessman. He is called the Oracle of Omaha for his sound business principles and profitable investments.

But if it's so easy, you ask, why aren't more people as incredibly rich as Buffett?
Because his approach takes the kind of discipline, patience and instinct that many people either don't have or are unwilling to develop.

Here are 10 rules that have helped the Oracle of Omaha find and sustain success.

1. Find Your Passion
Warren Buffett, when asked about the secret of his staying power, he replied that people should find their passion. He recalled that he was very fortunate to find it when he was 7 or 8 years old. At a young age, he read the book One Thousand Ways to Make $1000 which he borrowed in a public library. He stated that he was greatly inspired and began his entrepreneurial activities. He advised students that they may not find it on their first job, but they should take the job that they would take if they were already independently wealthy.

2. Hire Well
He recommends to business owners who are hiring people to find 3 things in their future employees. They should look first for integrity, then intelligence and energy. Buffett jokingly explains that if the person you hired has no integrity, then you might prefer them to be dumb and lazy rather than smart and energetic.

3. Don’t Care What Others Think
Warren Buffett stated that it never bothers him when people disagree with him. He admits that there are many things he does not understand, and he tries to stay away from them. However, there are things that he understands well and he stays in this area he calls his circle of confidence. When people tell him that he is wrong on something, he just goes back to study the facts. He believes having emotional stability is important.

4. Read, Read, Read
He revealed that he likes to read, and reads about 5 to 6 hours a day. He stated that he reads at least 5 daily newspapers, a fair number of magazines, annual reports, and others. Buffett admitted that he has always loved reading, especially biographies.

6. Have a Competitive Advantage
The nature of capitalism, according to Buffett, is that people, or competitors, will try to come and take your business, such as your customers or market share. In order not to be taken over, and to stay in business, you should have a competitive advantage. One of the best ways to be competitive is to be a low-cost producer. Another way is to have more talent or better resources.

7. Schedule for Your Personality
Warren Buffett stated that he has a very unstructured working day. He does not like meetings, but he reads a lot. He is also on the phone a moderate amount of time. Since his businesses have their managers, they run by themselves. However, his responsibility is acquiring capital. And he states that he is fortunate enough to do what he really likes to do, and be with people that he really wants to work with. He believed that having that kind of working schedule is productive for him because it fits his personality and aptitudes.

8. Always Be Competing
Looking at history, Buffett stated that most businesses die because of complacency. To keep a business alive, he stated that owners should have that certain restlessness, a feeling that competitors are always trying to overtake you but you want to stay ahead. So people in their business should always be moving. Resting on your laurels is dangerous, even for leading companies. It is wise to have that competitiveness just like when the business was just starting, even when they are already doing very well.

9. Model of Success
Warren Buffett was inspired by a book written by Ben Graham. Although he had read other books about investing before, he was influenced greatly by the writings of Mr. Graham. He sought Graham and even offered to work for his company for free. Buffett did work for Graham but earned a salary. He even named his second son Walter Graham Buffett after his mentor.

10. Give Unconditional Love
While this final rule for success by Warren Buffett has nothing to do with business strategy, it has a lot to do with your personality and beliefs. Being a philanthropist, Buffett believes in helping society and giving back to the world. This could be the reason why he is so successful. He is always looking to help and to give, rather than to take. When you operate in a giving and helping mindset, you will put your customers first, and this is what makes a business thrive

Warren Buffett has remained successful as the leader of his profitable company for more than 40 years. He has surely become very influential to many people but has remained humble despite his great wealth and success. He started The Giving Pledge and has pledged to give away at least half of his wealth. He invites other billionaires to do the same. He stated that he will leave his children only enough wealth “so that they will feel they could do anything, but not so much they would feel like doing nothing.”

These rules are worth considering for a successful professional and personal life. We would love to know what you think about Warren Buffet as an entrepreneur, please let us know your thoughts in the comments below.