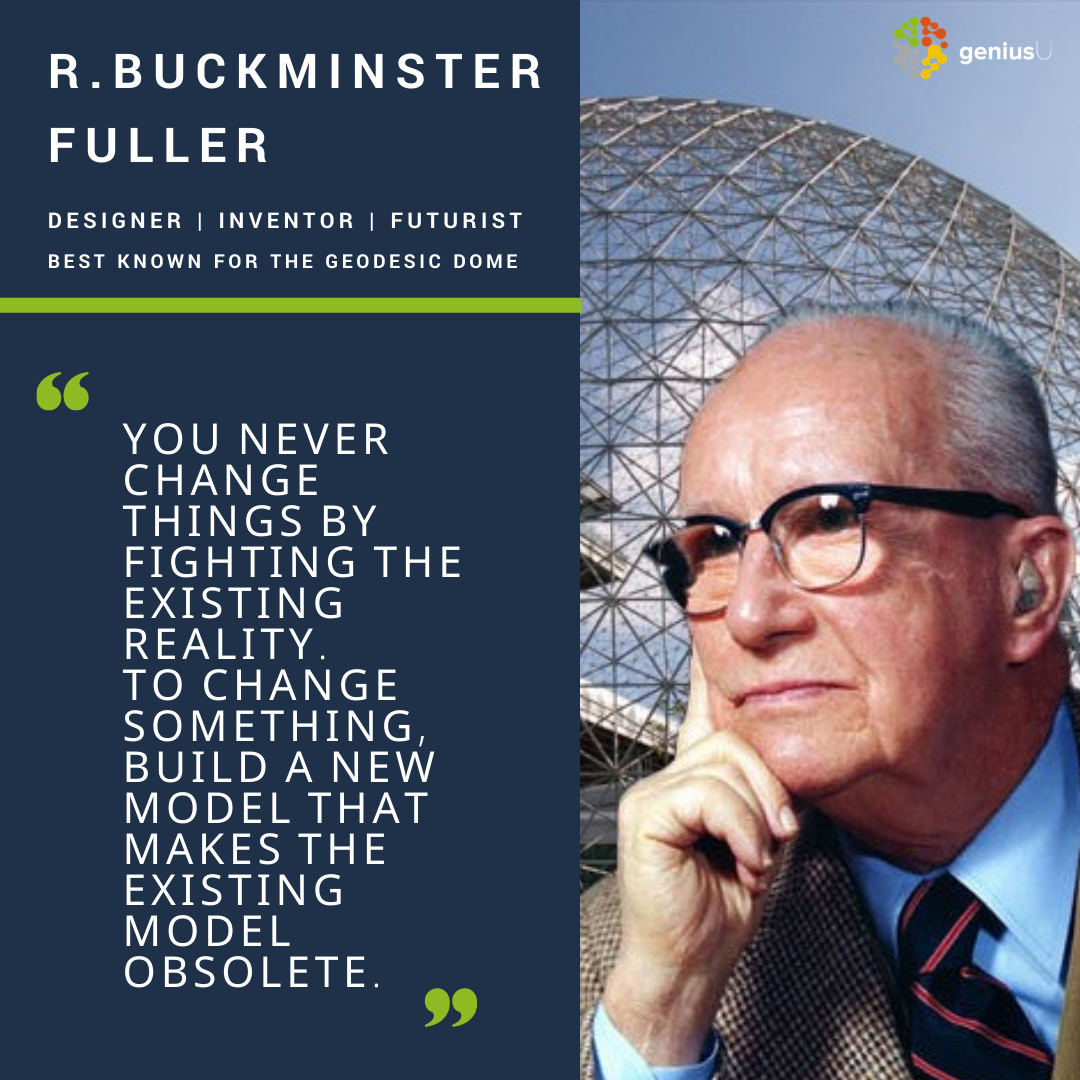 Richard Buckminster Fuller was a highly regarded and respected 20th-century inventor and visionary. Fuller believed in a Universe that was generative and self-supporting, self-sustaining and built with the inherent ability to provide substantially for all life forms it contained. Within the fabric and structure of this self-supporting universe, he postulated a self-managing universal accounting system that ensured success and abundance for all life on earth and beyond. To Fuller, it seemed clear that only an individual operating on their own economic and philosophical initiative could reveal the solutions required to humanity's global problems.

Fuller subsequently decided to dedicate his life to creating a world that works for all human beings equally rather than the gilded 1%. He became a practical philosopher demonstrating his universal concepts through inventions which he termed “artifacts.”

Produced over 300,000 times worldwide, Fuller's most well-known artifact and greatest monetary claim to fame is the geodesic dome – the hemispherical structure (lattice-shell) based on a geodesic polyhedron. Despite the absence of any third level degree, he lectured at universities and became a significant influence on the formation of ideas and work of subsequent generations.

Let's jump onto some of the self disciplines that Fuller established to become the foundation of a successful career as an inventor, design architect and philosopher.

Serve all humanity
Perhaps an idealistic and naive position to take, Fuller dedicated himself to provide solutions to all humanity's problems and to serve the interests through his work, of all human beings as opposed to traditional personal and business motivations which aim to self serve first and foremost.

He insists that the decision was not taken recklessly or on a naively altruistic basis, but rather based on evidence contained in his Chronofile, which demonstrated that when he was motivated to serve others first, then he would be adequately compensated.

Do your own thinking
He sought to do all his own thinking, confining it to information gained directly from his personal experience. He sought to move from a centred place of innate motivational integrity rather than trying to accommodate the opinions, values and theories of other people.

Never at the cost of others
He sought to pursue and develop his ideas for the benefit of everybody and at the expense or cost to nobody else.

These new inventions would provide society with technological advances and reforms that previously proved impossible by social reform. He sought to reform the environment through technology, not human beings.

Develop patience
Fuller assumed that nature and the universe as a whole, had their own unique gestation period, not only for biological elements but for technological inventions also.

Accept the spontaneity of acceptance
Fuller believed that humanity would inevitably adopt the devices and systems he created and so he sought to develop his artifacts with the necessary time margin anticipated. In other words, he believed that there was no need to rush his work or push or pressure for his ideas to be adopted. He assumed that nature would evaluate his work as he progressed providing he worked with nature's fundamental principles.

Learn most from mistakes
He sought to learn the most from his mistakes but never to ponder in worry or procrastination. When he did so he felt sad, but when he always sought to learn and progress, he felt happy. Therefore the way forward was practical.

Waste no time in worry
As mentioned above, Fuller sought not to ponder failure and instead, as he put it; I sought to…increase time invested in discovery of technological effectiveness.

Document progress in the official records
Fuller had no university degree, so to document his progress in the public records, he sought patents for all his inventions. Some of these expired worthless, some provided an income but as he stresses in Critical Path, his motive was not to make money from the patents.

Follow the rules
The rules seemed to be written by others and Fuller began to accept that he needed to follow them. He ignored his own thinking and trained himself as you would train to play football, to follow the rules of the game of life.

Educate oneself comprehensively
The breadth and depth of scientific knowledge are vast, but that didn't stop Fuller from undertaking the comprehensive education of himself. He sought to digest comprehensively the inventory of human understanding of all chemical compounds, weights, performance characteristics, and so on.

It didn't stop there. Fuller undertook to consume all the data he could, related to economics, global demographics, energy production capabilities, logistics and vital statistics yet amassed by human beings.

Operate on a do-it-yourself basis
He sought only to operate as a business of one – a remarkable undertaking. If he couldn't do it by his own ingenuity then it wouldn't be done.

With over 300,000 geodesic dome replications, more than 30 published books and 28 patents, Fuller was one of the great figures in the golden age of modernity, and his revolutionary and liberating thought made him a countercultural icon.

Buckminster Fuller wanted to live his life as a human trim tab that could steer the course of humanity in a better direction, despite being just an individual. Richard Buckminster Fuller unquestionably stirred the future of the design world and continues to inspire mankind today!

Always remember that we are unique, just like everyone else! 😊

"When I am working on a problem, I never think about beauty but when I have finished, if the solution is not beautiful, I know it is wrong."
— R. Buckminster Fuller