Millennial's on track to be the most Educated Generation to date 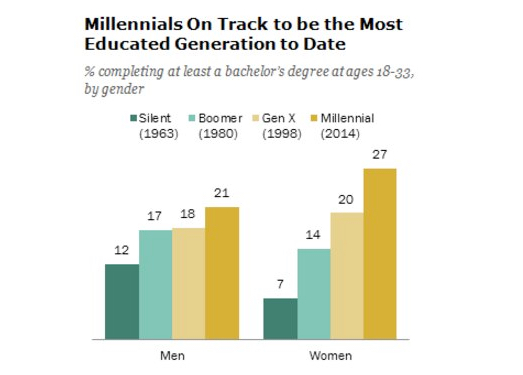 In 1966, the Vietnam War was raging, the Soviet Union and the US and its allies were locked in a nuclear arms race and John Lennon had proclaimed The Beatles were “more popular than Jesus”.

That year America's "Silent generation", now mostly in their 70s and 80s, was entering adulthood. During the intervening five decades they’ve witnessed huge changes to US society and culture.

Institutions like political parties, religion, the military and marriage no longer play such an important role in the lives of Americans, especially millennials. Today a majority of women are in the workforce and are more likely than men to have a college education. And at the same time, the US has become more racially diverse.

This is according to the Pew Research Center, which has compared US millennials with the Silent generation 50 years ago to reveal a string of changes that have occurred in young people’s lives.

The research highlights seven ways that millennials are different from the Silents, many of whom are old enough to be their grandparents.