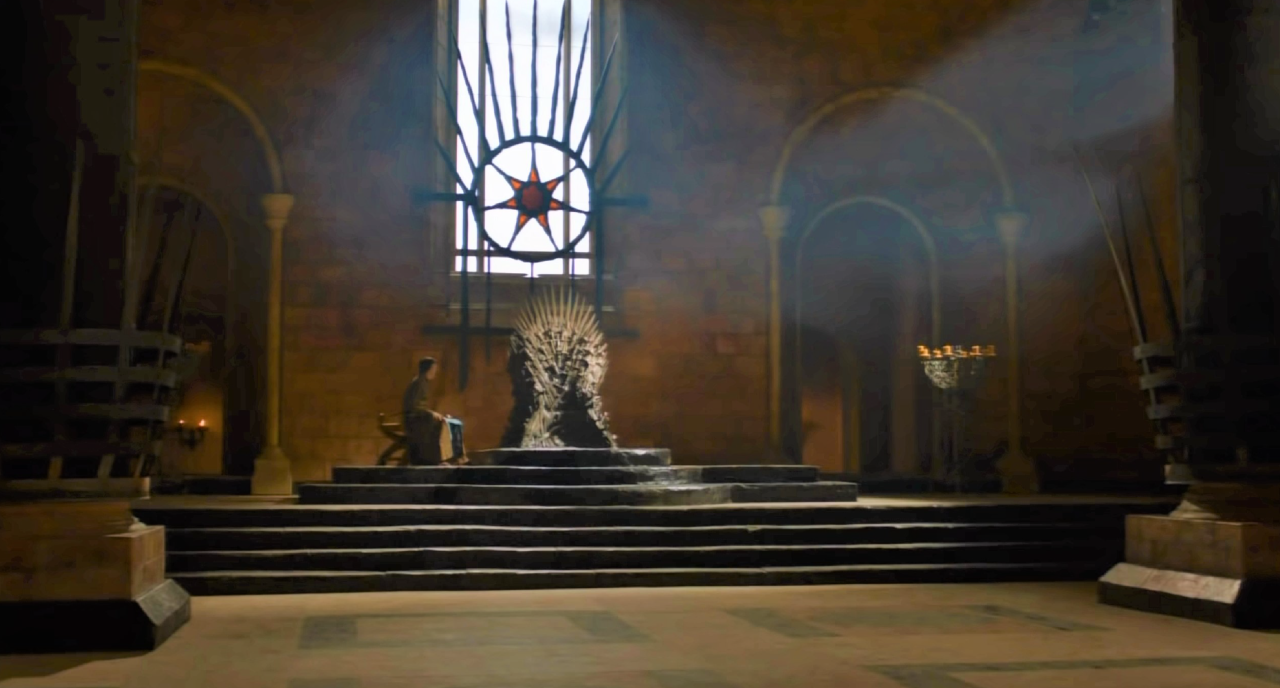 This is a challenging time for all of us, which has been discussed extensively throughout 2020. As a young career starter, I’ve been contemplating how sharing my perspectives can help reduce the worries and enhance the joy others derive from their work.

So based on my experiences and some intriguing examples from Game of Thrones (GoT), I hope that this ‘care package’ of an article can help my peers, or even my seniors, survive and thrive in the new normal.

Non-GoT fans, I see you! Don’t take your leave; you need not be familiar with the series to appreciate the insights covered below.

Here we have two of the king’s advisors, Varys and Petyr Baelish, arguably the best players of the Game of Thrones, sparring over the robustness of each other's plans.

Context and manipulative intents aside, both had ambitious visions of their purposes in life. Varys worked for the ‘good of the realm’, seeing that the livelihoods of the common folk were not eventually endangered by the whims of the rich. Petyr remarked that ‘chaos is a ladder’ – reflecting his skill for identifying opportunities in turmoil (alas, purely for his own profit).

Both were confident about envisioning their future positions, and attuned their mindsets towards them, allowing purposeful planning with strategic precision. Now imagine what they could have achieved if they were sworn allies.

When I first saw this scene, I was interning at my university’s career centre, which taught me about how clear goals, coupled with a strong foundational mindset, can be transformative for one’s career trajectory.

In short, I mean being able to adapt to new working conditions and pivot with a portfolio of relevant skill sets, all without being weighed down by that dreaded surge of anxiety.

If you have any ounce of opportunistic optimism, you’ll be able to find the silver lining and break out of any rut. If you can plan a few steps ahead, any black swan can be received with open arms instead of severe paranoia.

And even on your worst days, you’ll come to realise that it is not the event itself that is swaying your mood. It is your emotional response that’s holding you back. That’s how I managed to stay afloat during my days of childhood cancer and ostracism in school.

2. Design Your Own Education

Early in the series, Night’s Watch wannabe Jon Snow asks discriminated dwarf Tyrion Lannister why the latter reads so much. Tyrion’s reply? “A mind needs books like a sword needs a whetstone”.

Despite his highborn status, Tyrion recognises his liabilities and relies on knowledge as his weapon for social currency. He even chooses to risk his safety by travelling north with Jon, to gain new experiences.

We aren’t far off from Tyrion’s situation. And with the VUCA world becoming increasingly… VUCA, it pays to stay relevant with the times, employing both book smart and street smart strategies.

We all learn at our own pace too, and while the frameworks of mainstream education have equipped us substantially, can we claim that our journey is complete? If you find yourself pensive about this, perhaps it is time to supplement your status quo with more initiatives of self-directed learning; a process that you enjoy.

From my worldview, I’m grateful for the education pathway many of us went through, though I've always felt that academic prowess alone isn't fully representative of my potential.

That led to a turbocharged adventure involving soft skills workshops, industry talks and webinars related to social causes, all of which have helped me to think more holistically about problems, and confidently suggest interesting solutions.

Even now out of school, platforms such as LinkedIn Learning and Duolingo have helped to elevate my portfolio of skills. I’ll even mention Minecraft, which taught me about coding and design. Adults may smirk but the kids will smile!

Of course, designing your own education is easier said than done. There have been times when I thought my brain would explode with all the newfound data… but nothing beats blowing people’s minds with your ever-growing intellect and insights. And as many are realising, there is no age limit to being influential.

You could say that the ruthless bloodshed synonymous with Game of Thrones all started from the moment the Hand of the King, Ned Stark, realised the King’s son was a bastard born out of wedlock. He realised this from what appeared to be a regular conversation with his daughters. Everything was in plain sight, but he managed to connect the dots upon closer scrutiny.

Extracting the lessons from this scene, training your senses to be as sharp as Ned’s can work to your benefit, and aptly so in the digital age. With the deluge of information at breakneck speed, it is possible to slog from 9 to 5 and still recall a mindless blur. We see, but don’t scrutinise. We hear, but don’t actively listen. As Bruce Lee said: “The most dangerous person is the one who listens, thinks and observes.”

I’ve noticed many details and nuances from working with people in the past year; it wasn’t after my contract ended recently, that I could have the freedom of time to properly consolidate and refine these lessons for others to learn from, and enrichen their interactions.

Furthermore, as working remotely reduces the human touch of interaction, it also works in our favour to maximise the real-estate of what we present on our screens. Doing so can add value to others with keen eyes and keen ears, and articulate our personalities as much as possible.

Check out my ‘Maximise Your Brand During Video Calls’ eGuide on my LinkedIn profile to learn more about what I mean.

Do you recall your frustration with the Southern kingdoms in Seasons 6 and 7 of GoT, when they dismissively disregarded Bran Stark’s urgent warnings about the rising Undead threat in the North?

Now imagine that exact frustration if you wanted an employer to notice your worth… but you were merely shrugged off. Is there a way could you have done to stand out more?

Enter social media marketing. I used to think it was just for narcissists but having observed the outreach and impact it can achieve for important causes, I believe this skill set can empower one of any age to significant extent.

Remember that we humans are not psychic. Our impressions of one another are based on what we see and hear, especially so with remote networking. Hence, the magic spell to reigning in better business? Learning the necessary skills to articulate your worth as best possible.

Should you need some starting tips: Engage with powerful visuals paired with specific taglines. Digitally format your content so that it appears legible on mobile screens. Develop marketing speak so your copywriting touches the hearts of your audience. The currency you want to invest in is attention. Thereafter, everything else falls into place.

And if you are daunted by the elbow grease involved, ask your workplace marketer or load up some beginner YouTube tutorials. The more you familiarise, the more you can strategically innovate with tools like Instagram stories and your LinkedIn profile, to your branding advantage.

Personally, I keep a database of posts that have arrested my attention, for reference. Honing skills in Adobe Illustrator also helps, so I can fully customise my own adverts down to the pixel.

Daenerys Targaryen started out as a victim of abuse in a foreign land, but at the height of her power, she was loyally backed by armies of fearless warriors, veteran knights, seasoned advisors and fire-breathing dragons. Her ability to connect others and appreciate their counsel led to her reclaiming her homeland, while developing a strong personal resilience to adversity.

Which brings me to my final point. Learn to ditch the negative connotations associated with networking. Step out of your comfort zone. Form communities of emotional support. Establish fellowship with colleagues and mentors. The more diverse perspectives you gain, the more doors you can potentially open for yourself, be it trains of thought or career opportunities.

Don’t just limit networking to those of your industry. You can learn about resilience from the janitor. You can be awed by the honesty of children. You’d be surprised at how much you can learn from your enemies as well – they often spout harsh truths about yourself that your friends might be too polite to do so. Then make them your friends so they can become your valuable advisors.

And throughout these encounters, you’ll also be developing the powerful skill of codeswitching! Be it via languages, manners of speaking, using the appropriate keywords and analogies to simplify complex topics… all these tactics can deepen the social connection, and encourage more cross-sharing of ideas. If you want to build trust with others easily, this is your ticket.

I’ve also had many ask me how I’m hustling so much at my age, with multiple passion projects. That’s because I choose to see the wisdom in people of all ages. And when you invest early in the wisdom they share, the returns of investment compound. That means more resources in the future, and that means more time to spend with those you love. Isn’t that why we work so hard in the first place?

Time to Get Started!

Now, you may expect to walk away from this with a surge of competitive intent. As Cersei Lannister remarked: “When you play the Game of Thrones, you win or you die.”

But here’s a welcome challenge for all of us. In a world already beset with much uncertainty and strife, let’s see if we can play better and work towards everyone winning instead.

When we shift our mindsets, competitors can become collaborators, and at worst, only friendly rivalry in service of a common cause ensues. Everyone survives. Everyone thrives.

Thanks for staying this far. I wish you all the best for a fulfilling life ahead. 😊