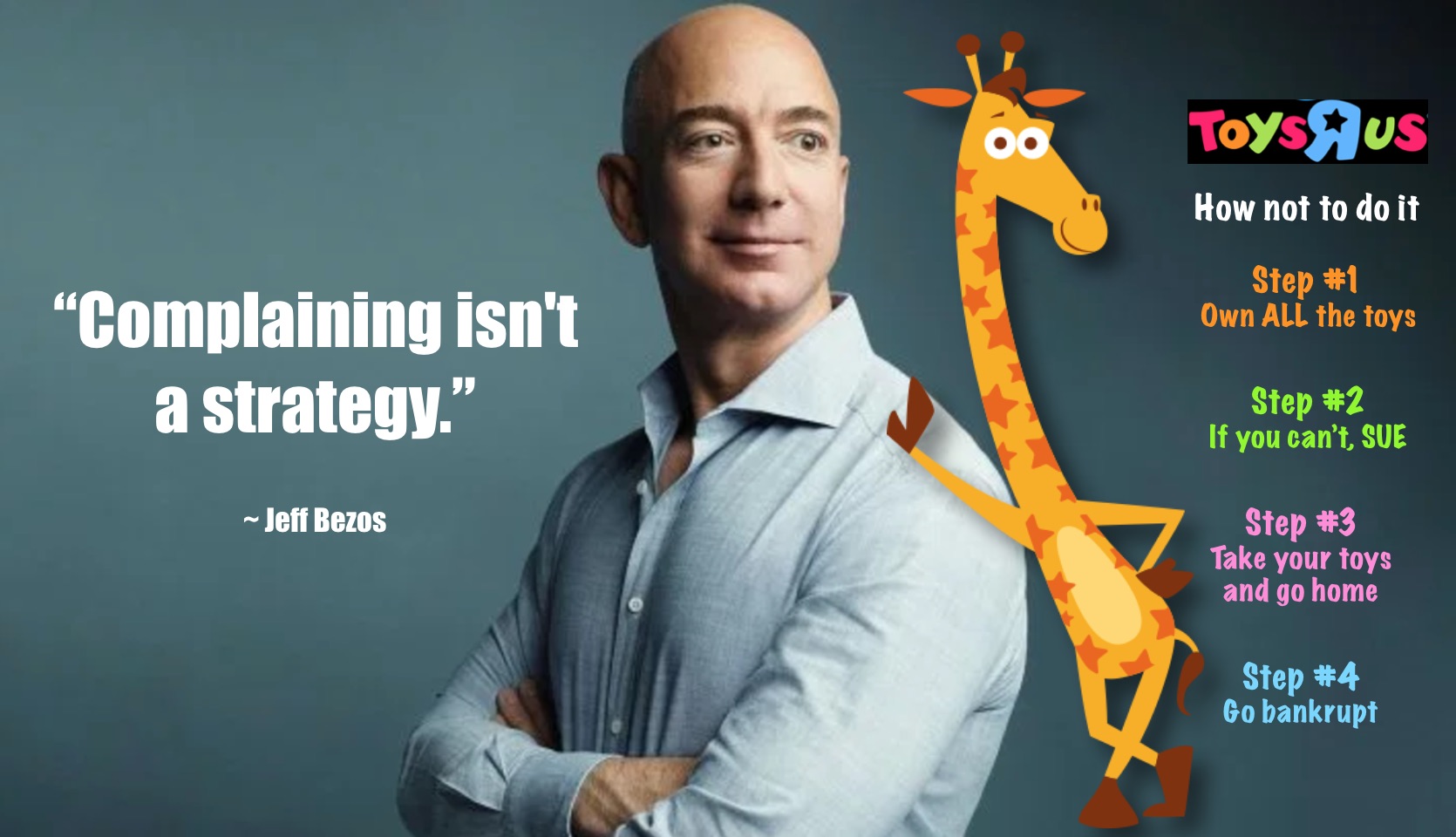 How not to play the game:

This week Toys R Us went bankrupt. It would be easy to see it as just another casualty of the decline of retail. But that would miss the true story…

Remember the story of Kodak inventing the digital camera and then doing nothing with it?

The story of Toys R Us is 10x worse. Because they had the chance to lead all online toy sales from the very beginning and were on the path to doing so, but they threw it all away.

It began in Christmas 1999, in the middle of the dotcom boom, when the Toys R Us website was so successful it was flooded with toy orders and couldn’t ship to all customers in time, leading to a $350,000 fine from the US Federal Trade Commission.

So they decided to get serious about their online sales.

Within two months, by February 2000 they had secured a $60 million investment from SoftBank to grow online, and a few months after that announced a deal to be Amazon’s exclusive toy supplier.

Within the first year, the partnership with Amazon led to ToysRUs being the world’s top toy site.

So far so good! What happened next?

The world turned from competition to collaboration.

Soon after they announced their partnership, Jeff Bezos launched Amazon Marketplace, which allowed anyone to sell anything on their site. To the winner-takes-all mentality of companies like Toys R Us, this was a shocking strategy.

Other retailers began selling toys not available in Toys R Us, giving customers greater choice. Toys R Us CEO, John Eyler, flew out to meet Jeff for an emergency meeting to force him to stop them.

Jeff said “someone ought to be able to find everything” on Amazon - and that by giving more choice to the customer, everyone wins. He pointed to the ongoing increase in Toys R Us sales as a result, and said they hadn’t broken their exclusive as none of these new toys were available on Toys R Us anyway.

Jeff added, if they wanted more control, why not increase their product range? Amazon would then happily make them the exclusive seller on all of the new products they offered as well.

Instead, Toys R Us sued Amazon for beach of contract. John testified “We are at a point in the relationship with Amazon where we have no trust whatsoever in dealing with this organization.”

He got a restraining order to try and prevent Amazon selling any other toys on their site. Amazon countersued for “chronic failure” to carry stock of the toys customers wanted.

The court case dragged on for five years and eventually Amazon settled with a $51 million payment to get out of the fight.

Toys R Us took their toys and went home, trying to compete with Amazon (and the rest of the Internet) with their own exclusive site, and raising $6.6 billion in a buy-out the year after the court case began, in 2005.

How did that go?

Amazon sales went from $2.78 billion when the Toys R Us deal was first struck, to $8.49 billion when Toys R Us sued, to $136 billion last year, making it the fastest company in history ever to reach $100 billion in sales.

Toys R Us flat lined on $11 billion in sales in 2016 - the same level of sales they had ten years earlier.

Saddled with $5 billion in debt, this week Toys R Us filed for bankruptcy.

Jeff Bezos says: “We’ve had three big ideas at Amazon that we’ve stuck with for 18 years, and they’re the reason we’re successful: Put the customer first. Invent. And be patient.”

Imagine if Toys R Us had embraced the same “customer first” philosophy as Amazon?

Imagine if instead of suing, they had listened, experimented, and worked together with Amazon?

We are living in a world where the rules have changed. Where it isn't Amazon or Toys R Us that wins. It's where the customer wins.

Throwing the toys out of the pram isn’t the best solution.

“What we need to do is always lean into the future; when the world changes around you and when it changes against you - what used to be a tail wind is now a head wind - you have to lean into that and figure out what to do because complaining isn't a strategy.”